The Cambridge Must Act campaign, supported by CRRC and other local groups, met with a sympathetic audience at the Cambridge City Council meeting held on 22 October 2020. CRRC Trustee Adrian Matthews (bottom right in the photo) presented an e-petition signed by over 600 residents to the meeting, calling for the Council to pledge to resettle a further 125 refugees in the City. 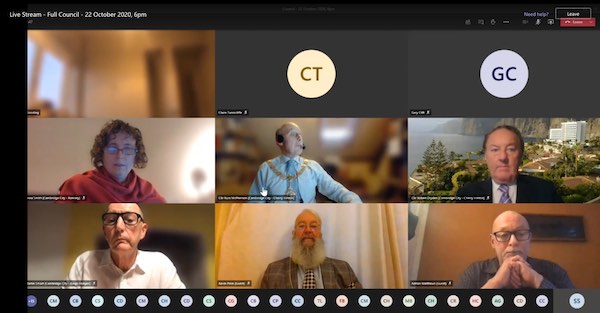 This represents the largest e-petition ever received by the Council and is a remarkable achievement, given the current difficulties with campaigning and gathering signatures, so many thanks are due to all those who signed and encouraged others to do so. There was unanimous cross-party support for the idea, with the ruling Labour group issuing a statement ahead of the meeting expressing their intention to seek to resettle 125 refugees as soon as the government re-starts its resettlement programme, with the aim of increasing that number to perhaps as many as 200 in partnership with other local councils. Five families in the current groups of refugees resettled under the Vulnerable Persons Resettlement Scheme are housed by South Cambs District Council with assistance from the City Council’s Communities team, offering a model for how this would work. You can watch a recording of the meeting here.

However, none of this can happen until the UK Government re-starts its resettlement programme, which was paused in March. Despite the UNHCR calling for resettlement to recommence with appropriate testing and quarantine measures, the Home Secretary Priti Patel is blocking the move. Families already promised homes in Cambridge remain trapped in Lebanon with no papers, no right to work and no date for transfer to the UK.

The campaign is not over.