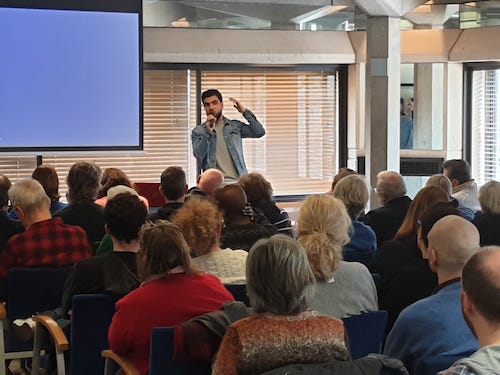 On 14 April, CRRC co-hosted a talk at the University Centre by Abdulazez Dukhan, a young Syrian refugee committed to telling the refugee story ‘through refugee eyes’. This was part of a UK-wide speaking tour arranged by Safe Passage for Abdulazez, and was attended by almost 100 people.

He was a funny, confident and lively speaker, describing his family’s experiences first as internally displaced people in Syria, their unsuccessful efforts to flee to Jordan, their stay in a camp in Turkey, a perilous sea crossing to Greece and a succession of camps there before being given asylum in Belgium. His art photography was on display and he is using both his photography, his social media presence and his speaking tour to reclaim an authentic voice for refugees.